On July 25, 2013, President of communist Vietnam, Truong Tan Sang, met Obama at the White House, as an urgent visit after seeing China leaders for 3 days in Beijing ending June 21. The news reported the visit aimed to reinforce political trust, friendship, and cooperation between the two Parties and States.

With President Barack Obama and Secretary of State John Kerry, the talk was in the areas that have been discussed – trade and military cooperation. Both also had a discussion about human rights that Obama included “the progress Vietnam is making and the challenges that remain.” Sang shared a copy of Ho Chi Minh’s letter marked February 28, 1946.

Why is that letter? What do those words mean in that particular time? People would think that Ho was seeking help from President Truman for political issues, but what were those issues and the timely circulating events.

Ho begged to inform Truman “that in course of conversation between Vietnam government and French representatives the latter require the secession of Cochinchina...” It is true that the Admiral Thierry d’Argenlieu, who was still in charge of Indochina, would separate South Vietnam as an autonomous state so that Ho Chi Minh and France government couldn’t have the chance to unify the three regions (3 kỳ unification).

In those early months of 1946, The France Provisional Government was in the control of Prime Minister Felix Gouin who was socialist, and Vice Maurice Thorez who also was Chairman of The France Communist Party. Ho and French communists/socialists had come to the discussion that ended with the signatures in “Franco-Vietnam Agreement of March 6, 1946,” a week after a letter to Truman. Sainteny was representative of France, Ho Chi Minh and Vu Hong Khanh of Vietnam, but Khanh withdrew after finding out Ho has been an international communist agent.

Obviously, d’Argenlieu, a non-communist/socialist, didn’t cooperate with that group and his intention to split South Vietnam out of their control. In this letter, Ho seemingly sought Truman’s intervention to persuading d’Argenlieu.

Ho Chi Minh wrote, “…the return of French troops in Hanoi stop meanwhile French population and troops are making active preparations for a coup de main in Hanoi and for military aggression.” This accusation was proved so wrong or Ho intentionally tried to cover up his true act that was to sell Vietnam to foreigners as people in Hanoi calling him “Ho Chi Minh Bán Nước” (Ho Chi Minh sells the country). Ho and French troops were combined against the nationalists.

The French government recognizes the Republic of Vietnam as a free state, having its own government, parliament, army, and treasury, belonging to the Indo-Chinese Federation and to the French Union.

Concerning the unification of the three ky (Tonkin, Annam, and Cochin-China), the French government binds itself to carry out the decisions taken by the population through a referendum.

10,000 Vietnamese with their Vietnamese cadres, under the military control of Vietnam. 15,000 French, including the French forces now located in the territories of Vietnam north of the 16th parallel. These elements must be composed solely of French metropolitan origin, except for soldiers guarding Japanese prisoners. These forces, as a whole, will be placed under the supreme French command with the assistance of Vietnamese representatives.

Ho Chi Minh welcomed 15,000 French soldiers into Hai Phong then they were marching to Hanoi. There were battles between the nationalists and French soldiers while Viet Minh as the back of. 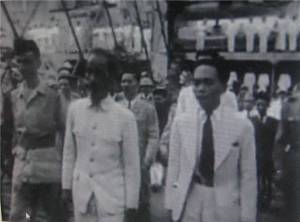 Pay attention to the words “free state”. There was no word of “independence” in the entire Agreement.

Jean Lacouture, a French journalist, wrote in “ Ho Chi Minh, a Political Biography” 1967, (page 128):  The very next day (February 14, 1946), General Leclerc – who was the acting high commissioner – sent a cable to his government, stating that a settlement with the Vietminh was a matter of urgency and that to obtain it they must be prepared to void the word “independence” without further delay.

There were two main stumbling blocks. The first was how to define and delimit the doc lap proclaimed in Hanoi on September 2, some six months after a similar proclamation in Huế.

Lacouture reminded readers the day of March 11, 1945, when king Bảo Đại proclaimed Vietnam Independence after the French overthrown by the Japanese. Vietnam with political vacuum in 9 days after the 2 bombs in Nagasaki and Hiroshima (Aug 6 and 9, 1945), Viet Minh plundered the Trần Trọng Kim Government and leading to September 2.

Ho would turn Vietnam into part of Metropolitan France or France Union as long as they all in one group with communist controlling.

True, once the general ( de Gaulle) had been replaced by Felix Gouin, and Soustelle (Minister for Overseas Territories) by Moutet, things became somewhat easier for the “liberal” group.…On February 16, 1946, Ho informed Sainteny that he was ready to negotiate on the basis of membership of the French Union; but he made no mention of the federation, nor did he abandon the demand for independence. Sainteny passed the news on to Leclerc, who urged Paris to accept.

In early June 1946, the French representative Jean Sainteny escorted Ho Chi Minh from Biarritz to Paris to attend the peace conference at Fontainebleau. Here Ho and Sainteny await the arrival of their plane at the airport in Paris. Sainteny, in his memoirs, noted that Ho Chi Minh appeared exceptionally nervous on the occasion.
Source: Ho Chi Minh, William Duiker, 2000

Ho’s effort in turning Vietnam a member of French Union was dispersed by the Fontainebleau Conference in France in the fall of 1946 when the communists and socialists had lost the seats in congress. The Agreement had no place to be realistic. The Mouvement Republicain Populaire (MRP) led by Georges Bidault won the election entering a new chapter in the France of a political era that first ended the colonialism to starting the war against communism in Indochina in Dec 1946.

Archimedes Patti, director of OSS in 1945, in “Why Vietnam”, 1980, wrote (page 4) : Ho who was a master of understated diplomacy…This statement would be very meaningful to the letter Trương handed to Obama. One would ask why Ho Chi Minh had sent all together 8 letters in those 2 years 1945 and 1946 to President Truman, but Ho received no answer including this one. This puzzle is one of many more that have led misconception about Ho Chi Minh’s attitude toward the United State. His use of the U.S. Declaration of Independence was a way of persuasion, not inspiration.

I write through researches from books of all aspects
View all posts by truehochiminh →
This entry was posted in Uncategorized. Bookmark the permalink.